OSHA Senior Investigator Jeff Oliver wants to help you prevent an unfortunate accident he recently investigated that involved an employee using a powered Industrial truck to manage warehouse inventory. If this scenario describes activity at your facility, don’t miss this opportunity to participate in an open discussion of lessons learned and best practices to keep employees safe. Jeff will also discuss what OSHA is looks at from the federal point of view.

Do your employees drive powered industrial trucks? Are you responsible for employee safety training? If so, this is an opportunity to learn strategies to improve safety. OSHA’s Jeff Oliver, Senior Investigator, Andover office will present a case study involving:

This case study will include open discussion on lessons learned and best practices. Jeff will also discuss what OSHA is looks at from the federal point of view. Attendees will be more aware of things to look for to address or prevent common deficiencies in their organizations.

View The Great Exchange’s  unique inventory of supplies and furniture and make your list. Find what you need, and more. Businesses, not-profits, schools, towns – last chance to save in 2019!

Get everything you need to prepare for the new year and pack up the old year!  Bins, Boxes, Binders, Cabinets, Cleaners, Cork Boards, Folders, Literature Racks, Shelves, Tables, and Lots More.  View pictures of new/like new supplies and furniture/fixtures available for nearly half price for businesses, not-for-profits, schools, towns.

DEVENS – The Devens Eco-Efficiency Center’s signature program “The Great Exchange” is all about re-purposing reusable resources, much like Devens itself, a civilian community that grew from the recycled roots of a former military base.

Operating out of two Devens locations – MassDevelopment headquarters at Andrews Parkway and next to the Eisengren Community Center on Sherman Avenue – the non-profit TGE organization, which launched in 2009, draws inventory from businesses in and around Devens and sells the items it collects back to small businesses and non-profits at bargain prices.

The center also hosts round table discussions and presentations for its members on timely topics.

Say a company has unused operating supplies, new or like-new equipment or office furniture it can no longer use and wants to find an eco-conscious way to dispose of. The Great Exchange can help.

TGE will collect the items from participating companies and offer them to others for resale.

The inventory ranges from small items such as office, craft, kitchen, cleaning, shipping and classroom supplies to larger items such as furniture: desks, file cabinets, tables, chairs to decorative wall art. All of the items are new or nearly new and tagged at less than half their value, Neely said.

Awesome might best describe the sight that greeted a visitor to the Eco-Efficiency Center at Andrews Parkway one day last month. Neatly shelved (by category) and labeled, the collection of reusables was displayed along a few walkably-wide aisles in a clean, well-lit basement space. Very user-friendly.

A snapshot can’t do it justice, but Neely’s guided tour does. People often marvel at the size and scope of the selection here, she said, and are often surprised at how inexpensive everything is.

Savvy shoppers might easily see creative new uses for this stuff. Like the other visitors that day, educators who came over after a conference at the Marriot next door.

As one teacher eyed a three-tiered carousel with plastic trays, a commercial display stand, envisioning it in her classroom, another found a case of folders. Too many. Neely offered to divide up the content. But two teachers decided to go in together, splitting the cost. Rummaging among an array of adaptable manufacturing byproducts, another teacher exclaimed: “There are so many funky things in here!”

For some, the Devens Eco-Efficiency Center is already the go-to of choice for office furniture.

The Harvard Police Dept., for example, has a number of items that Patricia Chadwell Natoli, administrative assistant to the town’s public safety departments, found here, all in great shape and far below what the town might have paid elsewhere.

Bowled over by the bargains in this basement and at the other site, Natoli became a fan early on. When the town’s newly-hired finance director was outfitting her office, she brought her out to take a look.

Recent stock also included a plentiful supply of textiles in an assortment of designs and textures.

Which could be why Bonnie Marchesani, president of ArtsNashoba joined the Great Exchange.

“TGE has provided materials for props, costumes, crafts projects and other activities,” for the theater group, Neely said. Marchesani’s latest visit was to shop for an upcoming production of “Frozen.”

All things considered, teaming up with TGE seems like a win/win.

Once focused only in Devens, TGE’s outreach has broadened, with 405 institutions on board. In 2018, 153 establishments participated, up 77 percent from the previous year.

Based on percentages, most are businesses, followed by non-profits, schools and municipal departments. In total, the TGE net covers 74 in-state communities and 11 outside Massachusetts.

The question then becomes, why not participate?

Neely thinks most of her target audience would get on board, if they were aware TGE is here.

“People want to do the right thing” she said. But some might not know who to call. Aiming to close the information gap and up participation, Neely said she plans “big time outreach” in the near future.

Largely untapped resources include schools and libraries, for example.

So what’s wrong with this stuff? Nothing. The condition is top notch, if not quite factory fresh.

TGE only takes in new or gently used merchandise, no shabby, second-hand items or damaged discards in the lot. Customers can count on that and participating businesses understand it, Neely said.

Items stamped with company logos, for example, retired long before their shelf life was over might work for a variety of uses. Like the spiffy notepads a reporter snapped up for less than $2 each.

One treasure trove came from Eglomise, which manufactured and sold specialty mirrors and other gift items featuring painted inserts depicting the nation’s colleges and universities.

Established in Shirley, Eglomise moved to a former hospital building in Devens, where its founder and her husband lived. After decades in Massachusetts, the company moved out of state when another family member took over the business. Now, some of the inventory customers once flocked to its factory sales to buy is here, at the center. “We bought the mirrors,” Neely said.

Mostly, though, TGE acquisitions come from search and rescue missions like the one that “rescued” 30 tons of material – unused plastic containers – from the Caines plant when it moved out of Ayer.

So far, according to “TGE stats,” the program has diverted over 475 tons of excess materials to reuses rather than landfills, including yearly rescue totals of 50 tons of supplies, office furniture and fixtures.

Most companies don’t hold tag sales, so re-useful articles like these could have ended up in storage, or worse, in a landfill. Like the furniture at the Sherman Avenue locale, including outsized wall décor, new office chairs galore and a sturdy, kid-sized table and chairs that came from a dentist’s office.

A self-described “tree-hugger at heart,” Neely left the fast-paced applications development world to earn a master’s degree and pursue her passion. Having found her niche with TGA, she hopes it will grow. Formerly a solo venture, she’s doubled the staff with Program Administrator Tracy Pierce.

It began with specific items, manufacturer’s byproducts crafters could use. Target audiences included schools and non-profits, inviting them to share resources and swap wish lists. “There was networking,” she said. And that, in a reusable nutshell, is how The Great Exchange was born. 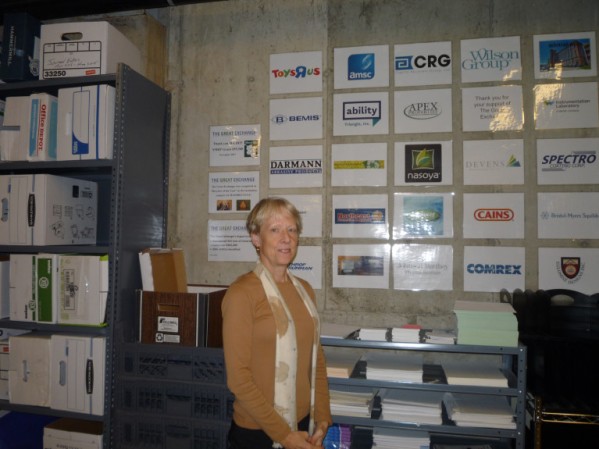 Devens Eco-Efficiency Center Director Donna Neely recently conducted a tour for visiting teachers who were attending a conference nearby. The colorful wall display behind her consists of company logos from businesses that have participated in the center’s signature program – The Great Exchange.

Colleagues will share and discuss EHS indicators their businesses track, how the data is used, challenges incorporating leading indicators, and improvements these indicators have driven in their EHS programs.

We will also look at the Devens Climate Action Planning Process currently underway and how EHS Professionals can benefit and enhance their EHS Programs to address the impacts of climate change on their businesses.

Directions to The Great Exchange